The Steven and Janice Brose Lectures in the Civil War Era

The Steven and Janice Brose Distinguished Lecture and Book Series in the Richards Civil War Era Center was established in 1998 and originally supported a single lecture by a distinguished visitor. The Broses added to the endowment in 2001, allowing a distinguished lecturer to deliver three related lectures over three days. The Broses’ generosity also enabled the Richards Center to enter an agreement with the University of North Carolina Press, which publishes the lectures as part of a series of scholarly monographs with the Richard Center Director serving as series editor. 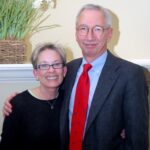