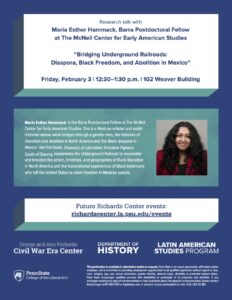 Dr. Hammack is a Mexican scholar and public historian whose work bridges through a gender lens, the histories of liberation and abolition in North America and the Black diaspora in Mexico. Her first book, Channels of Liberation: Freedom Fighters South of Slavery, reexamines the Underground Railroad to reconsider and broaden the actors, timelines, and geographies of Black liberation in North America and the transnational experiences of Black Americans who left the United States to claim freedom in Mexican spaces.

This research talk is sponsored by the Richards Center, the Penn State Department of History, and the Latin American Studies Program.

The Richards Center is excited to host a workshop for postdoctoral fellow Jessica Wicks-Allen’s manuscript, “‘If I Am Free My Child Belongs to Me’: Black Motherhood and Mothering in the Era of Emancipation.” The Richards Center hosts these workshops for our postdoctoral fellows during their time at the Center to help prepare their manuscript for publication. As part of the workshop, we bring in two senior scholars to comment. For Jessica’s workshop, Leslie A. Schwalm, Professor Emeritus at The University of Iowa and Marie Jenkins Schwartz, Professor Emerita at The University of Rhode Island, will be joining us. This event is open to Richards Center affiliated graduate students, pre-docs, post-docs, faculty, and other invited guests.

Lunchtime Workshop with Made by History

Lunchtime workshop with editors of the Washington Post‘s Made by History series. Brian Rosenwald, Scholar in Residence at the University of Pennsylvania and Kathryn Cramer Brownell, Associate Professor, Purdue University will join us for this hybrid event. This event is open to Richards Center affiliated graduate students, pre-docs, post-docs, and faculty. 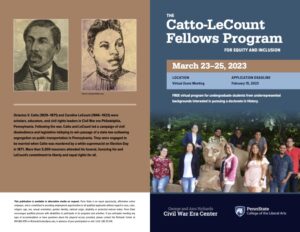 The Catto-LeCount Fellows Program for Equity and Inclusion exposes students to doctoral study in the discipline of history. During this three-day virtual program, Pennsylvania State University faculty and staff demystify the graduate school admissions process and educate participants about the academic profession. All expenses including course materials are provided by the university. Students also will receive a $250 stipend upon completion of the program. Penn State’s Richards Center, the Department of History, the Latina/o Studies program, and the Department of African American Studies sponsor the program in a collaborative effort to attract and enroll students from underrepresented populations.

This year’s program will be held virtually from March 23-25, 2023. Application requirements and details can be found on our Catto-LeCount Fellowship Program page.

On Thursday, March 23, 2023, historian Peniel E. Joseph will speak about the ideas in his recent book, The Third Reconstruction, which offers a powerful and personal new interpretation of recent history. The racial reckoning that unfolded in 2020, he argues, marked the climax of a Third Reconstruction: a new struggle for citizenship and dignity for Black Americans, just as momentous as the movements that arose after the Civil War and during the civil rights era.

Joseph draws revealing connections and insights across centuries as he traces this Third Reconstruction from the election of Barack Obama to the rise of Black Lives Matter to the failed assault on the Capitol. Joseph is based at the University of Texas at Austin, where he holds the following titles: Associate Dean for Justice, Equity, Diversity and Inclusion; Professor of Public Affairs; Barbara Jordan Chair in Ethics and Political Values; Founding Director, Center for the Study of Race and Democracy.

This event is sponsored by the McCourtney Institute for Democracy and the Richards Civil War Era Center, and is free and open to the public.

On Monday, April 3rd, the Richards Center and the Penn State Department of History will host Dr. Holly A. Pinheiro, Jr., Assistant Professor of History at Furman University, for a book talk in Foster Auditorium. Dr. Pinheiro will discuss his book, The Families’ Civil War: Black Soldiers and the Fight for Racial Justice, recently published in the University of Georgia Press UnCivil Wars Series.

This event is free and open to the public.