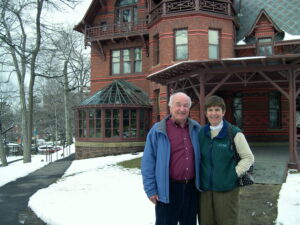 In 2002, George and Ann Richards made a spectacular contribution not only to Penn State and the Civil War Era Center, but also to Civil War era scholarship itself. Their gift of $3 million provided the Center with a permanent source of income that helps to fund graduate and faculty research, as well as outreach programs that influence students and educators around the country. Because of the magnitude of the Richards’ gift, the University elected to name the Center in their honor. Together the Richards shared a dedication to education and philanthropy, and George Richards has been an active friend of the Center, particularly as a member of our board of visitors.

George Richards graduated from Penn State in 1954 with a major in Commerce. He served in the U.S. Army before attending Harvard Business School. Ann Richards grew up in Manhasset on Long Island and attended Colby College in Maine, where she was a member of Sigma Kappa sorority and Cap and Gown. After graduation in 1956, she was employed as a dress buyer for Filene’s in Boston.

Mr. Richards eventually became the owner and CEO of Vitex Packaging, a manufacturer of materials for the tea industry. His company had several plants in the United States and penetrated the Asian markets which helped to make tea the world’s most popular beverage. He sold Vitex in 1998. More recently, Mr. Richards has been a member of the Board of Directors of Stoffel Seals Corp.

The Richards have long been known for their philanthropy. In 1994, they endowed the Bart Richards Award in Media Criticism in the Penn State College of Communications to honor Mr. Richards’ father. The Richards’ gift to the Civil War Era Center stems from a commitment to liberal arts education and from Mr. Richards’ family history. Both of George’s great-grandfathers served in the Union Army during the Civil War, one in the California Volunteer Infantry and the other in the First Missouri Light Artillery. For his and Ann’s longtime support of Penn State, George received the Distinguished Alumni Award in 2011, one of the most prestigious awards granted by the university.