Dr. P. Gabrielle Foreman, Paterno Family Professor of American Literature, professor of African American studies and history, co-director of the Center for Digital Black Research, founding faculty directory of the Colored Conventions Project, and faculty affiliate of the Richards Center at Penn State, has been named a 2022 MacArthur Fellow by the John D. and Catherine T. MacArthur Foundation.

Dr. Foreman is an award-winning teacher and scholar of African American studies and nineteenth-century literary history and culture. She is known for her collaborative work including an edition of Harriet Wilson’s Our Nig as well as dance/poetry performance pieces on Wilson, David Drake or “Dave the Potter,” the Colored Conventions, and Mary Ann Shadd Cary.

The group of 2022 fellows that Dr. Foreman joins, according to MacArthur Fellows Director Marlies Carruth, “…are architects of new modes of activism, artistic practice, and citizen science. They are excavators uncovering what has been overlooked, undervalued, or poorly understood. They are archivists reminding us of what should survive. Their work extends from the molecular level to the land beneath our feet to Earth’s orbital environment—offering new ways for us to understand the communities, systems, and social forces that shape our lives around the globe.”

Huge congratulations to Dr. Foreman for this amazing accomplishment!

Read more about the 2022 MacArthur Fellows 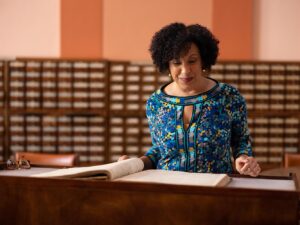 A transnational and comparative history, Civil Wars and Reconstructions in the Americas analyzes the similarities and differences between conflicts and post-war rebuilding in the US, Mexico, and Argentina in the second half of the nineteenth century.

Dr. Rothera is currently assistant professor of history at the University of Arkansas-Fort Smith. He is also the coeditor of The War Went On: Reconsidering the Lives of Civil War Veterans (LSU Press 2020).

Read more about Civil Wars and Reconstructions in the Americas: The United States, Mexico, and Argentina, 1860-1880. 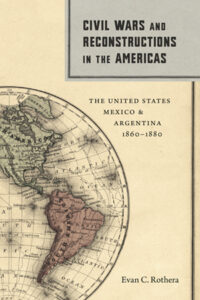 Read more about grants from the National Endowment for the Humanities 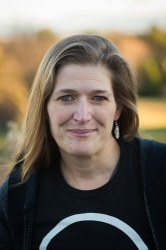 We are excited to share that Michael Haggerty of the Department of History at the University of California, Davis and Lauren Feldman of the Department of History at Johns Hopkins University will join the Richards Center as pre-doctoral fellows for the 2022-2023 year! The center launched the Predoctoral Fellowship Program in response to the unprecedented challenges experienced by graduate students as a result of the Covid-19 pandemic.

Michael Haggerty is a Ph.D. Candidate in the Department of History at the University of California, Davis. His scholarship has been supported by fellowships from the Bilinksi Educational Foundation, the New York Historical Society, and the New York Public Library. His current dissertation project is entitled “Bars to Freedom: Emancipation, Incarceration, and Slavery in Nineteenth-Century America.” His work centers the experiences of incarcerated peoples within the political debates that surrounded slavery and gradual emancipation in New York City during the first half of the nineteenth century.

Lauren Feldman is a Ph.D. student in History at Johns Hopkins University. Her work centers on intersectional histories of intimacy and investigating the broad intellectual question about how norms surrounding relationships in the U.S. have been created and reproduced over time. She is particularly committed to demonstrating how matters surrounding intimacy shed new light on conventional “big-picture” questions of U.S. history and historiography. In this vein, Lauren’s dissertation focuses on the contingent process by which marriage and state became intertwined in the U.S., from the period of the American Revolution to the Civil War. Through an examination of debates over early American marriage laws, she historicizes marriage’s centrality to the formation of United States governance, as well as the implications thereof surrounding the creation and maintenance of a U.S. privatized social structure. As part of this project, she also works on the history of slave marriage in the United States. Lauren’s work has been supported by multiple institutions, including the American Historical Association, the New York Historical Society, and New York State Archives. At Johns Hopkins, she serves as the Project Coordinator for Hard Histories, a public history initiative that examines the histories of racism and discrimination at the university.

During their time in State College, the fellows will make progress on their dissertations and take an active part in both the Richards Center and Penn State’s community of researchers. 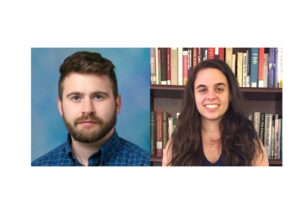 Congratulations to Dr. Lorien Foote, whose Rites of Retaliation: Civilization, Soldiers, and Campaigns in the American Civil War won the Organization of American Historians Civil War and Reconstruction Book Award! Foote published Rites of Retaliation in the University of North Carolina Press Steven and Janice Brose Lectures in the Civil War Era Series.

A military and cultural history, Foote’s recently published book explores the meanings of and shifts in civilized warfare during the American Civil War. In describing the work, the committee wrote, “Rites of Retaliation‘s particular brilliance, through its focus on the southeastern theater, is in outlining the central role of Black soldiers in shaping both Union and Confederate retaliation policies—a multifaceted series of exchanges that sometimes led to restraint, and on other occasions, an acceleration of violence and brutality. The approach is as innovative and provocative as it is impeccably researched and cogently argued.”

Read more about the 2022 Organization of American Historians Awards

Read more about Rites of Retaliation: Civilization, Soldiers, and Campaigns in the American Civil War 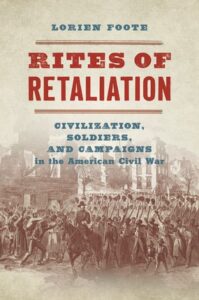 Joseph Williams is a PhD candidate at Rutgers University and an historian of the nineteenth and early twentieth centuries with research interests in Black intellectual history, Black women’s history, and the history of American religious reform. His dissertation, “Black Club Women, the Production of Religious Thought, and the Making of an Intellectual Movement, 1854-1933,” examines Black women’s conceptualization of the immaterial as well as the pluralistic approach they employed to launch an intellectual movement in the Black community. His work has been recognized by several institutions, including the American Council of Learned Societies, the Institute for Citizens & Scholars, the Louisville Institute, and the Ford Foundation. Joseph also runs The Eulogy Project, a digital humanities initiative dedicated to the preservation of eulogies and other forms of tributes produced in honor of African Americans.

Jessica Wicks-Allen is a PhD candidate in History at the University of Maryland. She is a specialist in nineteenth-century African American history with particular interest in Black women, slavery, emancipation, the Civil War, and Reconstruction. Her dissertation titled “‘If I Am Free My Child Belongs to Me’: Black Motherhood and Mothering in the Era of Emancipation,” investigates how mothering, motherhood, and the ability to bear children shaped Black women’s transition from slavery to freedom in the U.S. South. The project traces how pregnant women and women with children fit into the new free-labor system, navigated involuntary child apprenticeship, negotiated custody and childrearing responsibilities with the fathers of their children, and established broader systems of support. It also seeks to unearth freedpeople’s own constructions of motherhood by examining their attitudes toward childbirth and motherhood, Black communities’ notions of proper mothering, and the roles of mothers and their children at various stages in their life cycles. In her scholarship, Jessica not only strives to bring Black mothers from the margins to the center of the historical narrative but to narrate the history of emancipation from their vantage and to reconstruct the gendered world in which they lived and labored. Her work has been supported by the American Philosophical Society and the Society of Civil War Historians.

We are excited to share that Director Rachel Shelden has been awarded a fellowship from the National Endowment for the Humanities for her book project, The Political Supreme Court: Justices, Partisanship, & Power, 1830–1900.

The research and writing that Dr. Shelden will be able to do with this fellowship will lead to her book on the U.S. Supreme Court’s evolving relationship to the political system across the nineteenth century. Congratulations, Dr. Shelden!

Read more about grants from the National Endowment for the Humanities 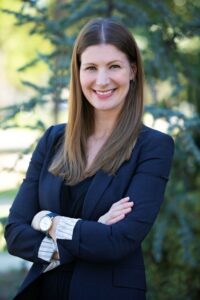 In acknowledgement of the unprecedented challenges experienced by graduate students as a result of the Covid-19 pandemic, the Richards Civil War Era Center invites applications for two predoctoral dissertation fellowships in the history of the Civil War Era, beginning July 1, 2022. Benefits include a living stipend, no teaching, and no enrollment at Penn State.

More information including how to apply can be found here: https://richardscenter.la.psu.edu/fellowships/predoctoral-fellowship-program/

Ariel Ron, Author-Meets-Readers, with Matthew Karp, Sally McMurry, and Gautham Rao, and moderated by Emma Teitelman (open to the public)

Grassroots Leviathan: Agricultural Reform and the Rural North in the Slaveholding Republic.

In this sweeping look at rural society from the American Revolution to the Civil War, Ariel Ron argues that agricultural history is central to understanding the nation’s formative period. Upending the myth that the Civil War pitted an industrial North against an agrarian South, Grassroots Leviathan traces the rise of a powerful agricultural reform movement that fundamentally recast northern farmers’ relationship to economic development, the federal government, and the constitutional compact. 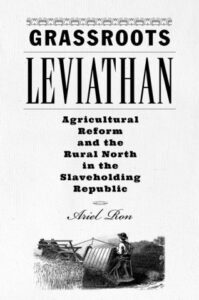 This project offers an intervention in disability and medical studies by investigating drug protocols administered to sick and wounded soldiers to arrest pain during the Civil War and then by charting the consequences of those protocols in the long postwar period.  In his research Jones finds an early opioid crisis that has never been recognized as such and that has crucial resonances with the 21st-century version of opioid overuse instigated by the pharmaceutical industry and an under-cautious medical establishment. It is not simply that Jones’s study of Civil War soldiers’ addictions has current sociomedical relevance, but in showing how addiction has been systemically and institutionally constructed, he provides a model and a cautionary tale about the perils of accusing veterans of moral weakness instead of the chemical dependency that was, in effect, perpetrated on them by 19th-century medical practitioners who were caught up in dangerous cycles of over-prescribing.  In this sense, Jones has brought modern medical knowledge of the pharmacopoeia to bear on what he terms the first national “epidemic” of opioid abuse. Given the last two decades of scholarship on war memory, Jones notes the absence and thus the irony of the dearth of studies about wartime addiction.  What separates Jones’s work from other recent studies is his deep immersion into surgical perspectives that redefined addiction as a psychological impairment and not a life choice in the wake of the Civil War. This research has the power to broaden understandings of today’s opioid crisis by contextualizing it in another historical period, and it opens the study of military trauma to wider inspection in the worlds of medicine and psychology.  On its way to becoming an important monograph, “Opium Slavery” presents original scholarship based on an impressive and creative use of primary and secondary sources.