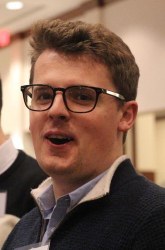 I am a historian of the 19th century United States and its relationship with Native Americans. My current project focuses on the federal trading houses in the early 19th century, examining the ways in which the local context of these institutions shaped their operations.