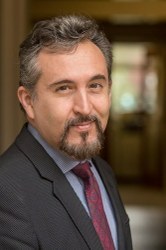 A. K. Sandoval-Strausz was born in New York City to immigrant parents. He teaches courses in Latino studies, urban history, spatial theory, sociability, and immigration. He is a National Endowment for the Humanities Public Scholar and a Distinguished Lecturer of the Organization of American Historians.

His current book project, Latino Landscapes, involves a larger-scale application of the epistemology of his first book: the idea that human beings reveal themselves most clearly through their built environment, and that people’s homes, neighborhoods, places of work and play, and use of public space must be taken as seriously as textual sources. The logic behind Latino Landscapes is that in order to understand modern U.S. cities, we must begin by analyzing the architecture and spatial practices of people who have moved into cities throughout the Americas.

Making Cities Global: The Transnational Turn in Urban History (University of Pennsylvania Press, 2018), coedited with Nancy H. Kwak and with a foreword by Thomas J. Sugrue.

“Latino Vernaculars and the Emerging National Landscape,” Buildings & Landscapes: The Journal of the Vernacular Architecture Forum 20 (2013).