Images of armed white men and women storming the Capitol Building carrying Confederate battle flags and other emblems flooded social media and television screens. Resulting in the death of two Capitol police officers, this twenty-first century contestation over Civil War history and memory has stunned the nation and the world. Within twenty-four hours, Civil War and Reconstruction era scholars have cogently and ably responded through a series of op-eds.

While not an exhaustive list, below are some recent publications offering context, teaching resources and clarity for seeking understanding on the events of January 6, 2021.

Eric Foner, “The Capitol Riot Reveals the Dangers From the Enemy Within,” The Nation, January 8, 2021.

Kelly Carter Jackson, “The Inaction of Capitol Police Was by Design,” The Atlantic, January 8, 2021.

Rachel Hartigan, “Was the Assault on the Capitol Really ‘Unprecendented’?: Historians Weigh In,” National Geographic, January 8, 2021.

Joshua Rothman, “Mobs of White Citizens Rioting Have Been Commonplace in the United States for Centuries,” The Hechinger Report, January 8, 2021.

Melissa DeVelvis and DJ Polite, “The Attempted Insurrection Was Only Part of the Right’s Anti-Democratic Playbook,” Washington Post, January 10, 2021.

Over the next few weeks, Muster will feature posts for understanding and teaching January 6, 2021 and its aftermath. If you are interested in contributing a piece for this Muster series, please consider pitching us an idea.

Post shared from the Journal of the Civil War Era Muster blog. 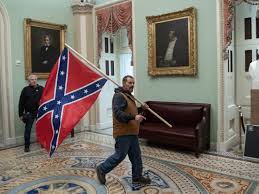