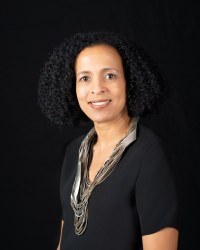 Young is the author of Soul Power: Culture, Radicalism and the Making of a U.S. Third World Left (Duke UP), which looks at the influence of Third World anticolonialism on activists, writers and filmmakers of color in the 1960s and 1970s.  The project earned her fellowships from the Ford and Mellon Foundations.  She is the author of articles, reviews and short essays in several journals including American Quarterly, New Labor Forum, Dispositio/n, American Literature, Cinema Journal and the Journal of Visual Culture.  She also recently co-edited with Min Song a forum for American Quarterly entitled “Whiteness Redefined or Redux?”

Her current manuscript, Terror Wars-Culture Wars: Race, Popular Culture and the Civil Rights Legacy After 9/11 considers the contours of popular culture and contemporary discourse in the wake of the attacks on the World Trade Center and the Pentagon.  Of particular interest are questions of black citizenship and immigrant exclusion.  She considers a range of texts in order to decipher how African Americans are being reinscribed as ideal citizens in contrast to new Asian, Arab and Latino/a immigrants who are positioned as inherently suspicious and inassimilable.  The project has been supported by a fellowship at Harvard University’s Charles Warren Center for Studies in American History.